I made a bean, beef sausage and pork dish the other day that we’ve been talking about since. Not because it was so fantastic (although it wasn’t terrible either), but because not all of our immediate family members can agree on what it is. I say it’s North Macedonia’s national dish, while my Lousiana-born significant other foolishly claims it’s Creole Cassoulet.

I looked it up. It could very well be both. It could also be French Cassoulet or Serbian Prebranac.

It all began with Erik’s expat pining after refried beans. We have a saying ’round these Balkan parts. When something is dumbfoundingly simple and requires very little effort or talent, we say it’s easy as beans, or “prosto kao pasulj.” The Balkans are bean country. There are dozens upon dozens of bean dishes in every Balkan country, most of them reserved for cold winter months.

I figured, with my extensive Serbian heritage and decent cooking skills, I could surely pull off some simple frijoles refritos. I began by ordering some proper organic pinto beans. At the time of ordering, however, I forgot that frijoles refritos are a staple dish. So I may have ordered (a few pounds) too many.

Turns out making refried beans from scratch really is easy as beans. But I was still left with more beans than I knew what to do with (and there’s still more down in the pantry, even after this post). There’s only one other dish that I know how to make that can work with pinto beans, so I decided to whip that up for dinner.

I know the dish as Gravče na Tavče or Tavče Gravče. In Macedonian, “grav” means beans and “tava” means pan. Beans in a pan. Or, if you will, Macedonian refried beans. But the Balkan main dish, not the Mexican staple.

I was kind of excited to introduce my expat husband to yet another unique Balkan dish. Except when we sat down to dinner, he was excited about having what he claims is a typical New Orleans dish, Creole Cassoulet.

Nuh-uh. I don’t think so. NORTH MACEDONIA HAS HAD QUITE ENOUGH OF THE WORLD’S SHIT WITH THIS NAME DISPUTE STUFF, THANK YOU VERY MUCH. (Please note that there is a similar Greek dish by the name of Fasoulotavas, but it is a vegetarian dish made with butter or elephant beans. Kthanksbye.)

Wikipedia sort of/kind of supports his claim, although the same platform also states that the dish can only be made with kidney beans. I’ve tried it with both kidney and pinto beans and the pinto bean version is better. 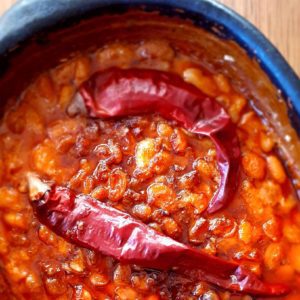 Because this is a traditional dish that’s been around in this region for a very long while, this recipe is just one of many and I’m sure it’s different from others out there. That also means that the meats listed here aren’t etched in stone. I was taught that at least three different kinds of meats/sausages should be used in this dish, so feel free to add or change what you use. A little smokiness and at least one type of sausage, however, are a must for full flavor.
Keyword bean dish, beans, cassoulet
Cuisine Recipes

This website uses cookies to improve your experience while you navigate through the website. Out of these cookies, the cookies that are categorized as necessary are stored on your browser as they are essential for the working of basic functionalities of the website. We also use third-party cookies that help us analyze and understand how you use this website. These cookies will be stored in your browser only with your consent. You also have the option to opt-out of these cookies. But opting out of some of these cookies may have an effect on your browsing experience.
Necessary Always Enabled
Necessary cookies are absolutely essential for the website to function properly. This category only includes cookies that ensures basic functionalities and security features of the website. These cookies do not store any personal information.
Non-necessary
Any cookies that may not be particularly necessary for the website to function and is used specifically to collect user personal data via analytics, ads, other embedded contents are termed as non-necessary cookies. It is mandatory to procure user consent prior to running these cookies on your website.
SAVE & ACCEPT